start of the waltz

The term Walz comes from the old German word "Waltzen" - to roll, turn or glide. The Weller or turning movements were danced by peasants in Austria and Bavaria as early as the 17 Century and much of the familiar lilt of the waltz can be traced back to simple peasant yodelling and dancing. 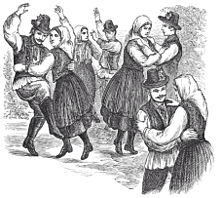 During the middle of the 18 Century the Allemande form of the Waltz was very popular in French high society. Originally danced as one of the figures in the contradanse, with arms intertwining at shoulder height, it soon became an independent dance and the "close hold" was introduced. 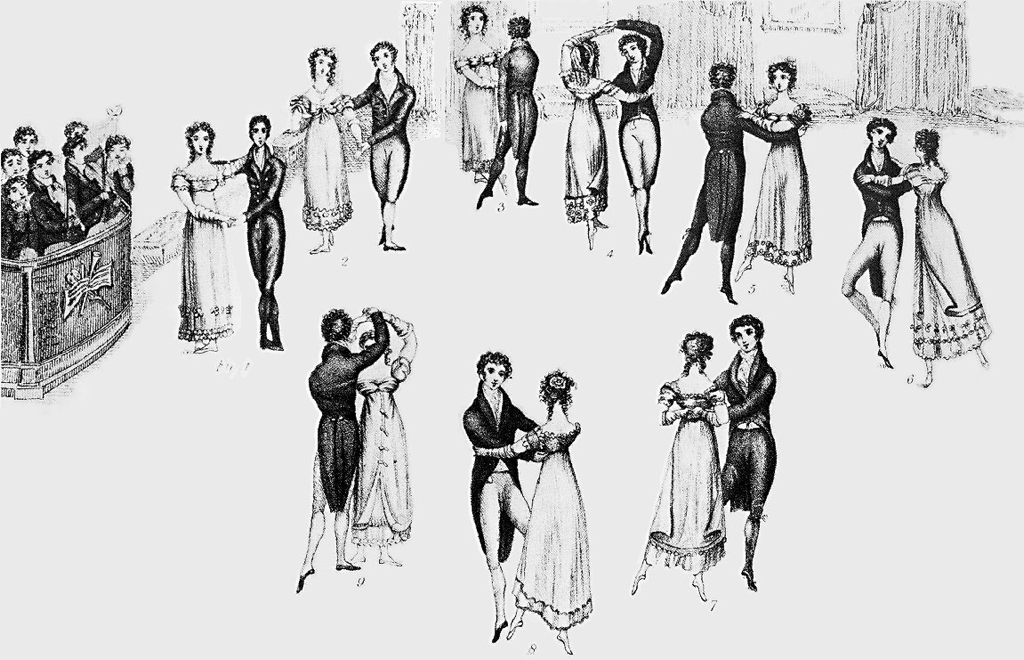 The waltz became very popular across Europe with increased interest due to the two great Austrian composers Franz Lanner and Johan Strauss. They set the standard for the Viennese Waltz - a faster version of the standard Waltz.
The following is an extract from the movie "Sissie" 1955 staring Romy Scneider - an example of the court Viennese.
However, in England a land of much more demanding morals, the Waltz was slower to arrive. Indeed, in 1816 after the Waltz was introduced in a London Ball given by the Prince Regent, a blistering editorial in the Times appeared:

"We remarked with pain that the indecent foreign dance called the Waltz was introduced (we believe for the first time) at the English court on Friday last ... it is quite sufficient to cast one's eyes on the voluptuous intertwining of the limbs and close compressure on the bodies in their dance, to see that it is indeed far removed from the modest reserve which has hitherto been considered distinctive of English females. So long as this obscene display was confined to prostitutes and adulteresses, we did not think it deserving of notice; but now that it is attempted to be forced on the respectable classes of society by the civil examples of their superiors, we feel it a duty to warn every parent against exposing his daughter to so fatal a contagion." (Source: The Times of London, 16th July 1816)

​
Even as late as 1866 an article in the English magazine Belgravia stated:

"We who go forth of nights and see without the slightest discomposure our sister and our wife seized on by a strange man and subjected to violent embraces and canterings round a small-sized apartment - the only apparent excuse for such treatment being that is done to the sound of music - can scarcely realize the horror which greeted the introduction of this wicked dance." 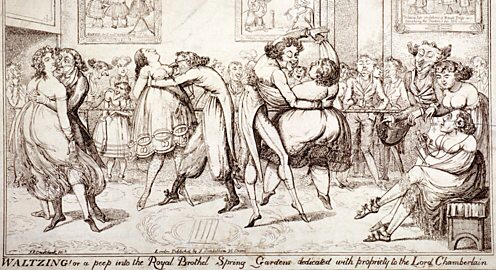 What made the Waltz acceptable was the love of it by Queen Victoria and Albert, when they danced it in Court circles.

The Waltz was now firmly established, travelled across to America, when a few variations were added, and became a standard ballroom dance. Its popularity waned at the start of the 20 Century when new dances were created, mainly in America. Indeed the Foxtrot became all the rage and the Waltz almost disappeared but after the 2nd World War it regained its popularity and today is danced in two accepted firms - The Modern Waltz and the Viennese Waltz.
Professional dancers Mirko and Alessia. Notice the gliding movements and rise and fall of the feet.
Dancehealthfitness c2018
dancehealthfitness 2015