​As the story goes, the originator of the "Foxtrot" was one Harry Fox who performed in variety acts in New York vaudeville around 1914, creating the history of the Foxtrot. Born, Arthur Carringford in 1882, he was given the name Fox after his grandfather. 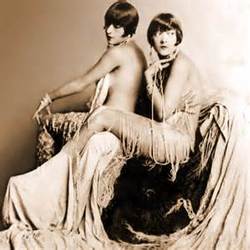 In 1914 Fox appeared at the New York Theatre with his company of "American Beauties" who were headlined by the "Dolly Sisters". Fox married Yansi, one of the sisters. At that time, the roof of the theatre was converted into the "Jardin de Danse" and between the shows, dancing was featured, including Harry trotting to ragtime music. At first, his movements included many short, trotting steps, as well as kicks, jumps and lunges. This became very popular in dance studios and dance halls and became known as "Fox's Trot"
Dolly Sisters
​                                                  [ perhaps the beginning of the term "dolly birds" ] 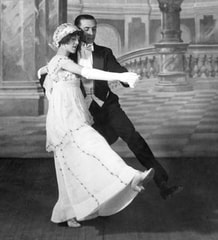 Vernon and Irene Castle were a husband-and-wife team of ballroom dancers and dance teachers who appeared on ​Broadway and in silent films early in the early 20th century. They are credited with reviving the popularity of modern dancing.
The couple reached the peak of their popularity in Irving Berlin's first Broadway show, Watch Your Step (1914), in which they refined and popularized the Foxtrot.

​During the Jazz Age of the 1920s, the Foxtrot regained some of its earlier styles with some of the hops and skips of the Charleston. It became known as the "Quick Time Foxtrot and Charleston" and was all the rage. Indeed, it was titled the QTF&C and outside ballrooms of the time you would see notices "Please QTF&C quietly - respect the locals"!
​Interestingly, the Charleston was only popular from 1924 to 1927, although its legacy remains.
​While the dancing world’s elite was still trying to capture the unusual style and movement of the Foxtrot, G.K. Anderson, a very talented American came over to London and won many dance competitions with Josephine Bradley. He sealed the style of the Foxtrot with his signature dance.

Ballroom dancing, of which the Foxtrot is one type, was enjoying great popularity. It was needed to develop a dance form that could express the slow syncopated 4/4 rhythm and remain on-the-spot. The on-the-spot dancing became known as Crush, then Rhythm dancing. It is today known as social dancing.

Foxtrot quickly developed into the most popular social dance. It is the easiest to pick up and the hardest to master. Today, the Foxtrot is danced to popular musical standards such as Tony Bennett and Frank Sinatra. It is an extremely versatile dance and can be performed to such music as fast country-western as well as slow tangos. The foxtrot is a must-have in a social dancers quiver and it can be relied upon when all else fails.

In the American style, the Foxtrot is classified as a “Smooth” dance. In the international style, it is called a “Modern” or “Standard” dance. It progresses along the line of dance or otherwise counter-clockwise around the dance floor. It is characterized by its continuity, rhythmic rise and fall as well as rotation.
Dancehealthfitness c2018
dancehealthfitness 2020